What is Screen Printing?

06 Feb What is Screen Printing?

Most of us have drawers full of screen printed t-shirts and hoodies.  Each one probably tells a different story…it commemorates a special event we attended, a charity we were involved in, it shows off our favorite brand or just somehow highlights our individual personality or sense of humor.  T-shirts are basically blank canvas’ that can be used to convey just about any message or feeling you can imagine with screen printing.

So, we all have screen printed t-shirts and hoodies but how many people know what screen printing really is and how it works?  Ever wonder about it?  Okay, maybe you’ve never lain awake at night contemplating it but we sure think it’s cool so we’re going to drop some knowledge on you.

Sometimes referred to as silk screening, screen printing is a printing method used on an endless array of items such as posters, koozies, pens, signs and, our favorite, T-shirts & Hoodies!  In a nutshell, a stencil is made using a mesh screen and then ink is pushed through the screen with a squeegee to create your print.  Believe it or not, this method was first used in China as far back as 1000 AD (during the Song Dynasty in case you’re really that curious) but it was pop culture icon, Andy Warhol, who popularized it back in the ’60s.

So What’s Our Process?

Since each color is printed one at a time, we first take your image into the computer, separate it by color and print each separate image/color onto a clear film.  The “screen” is basically a fine mesh that’s stretched over a metal frame.  Using a light sensitive emulsion applied to the screen, we’re able to transfer the image from the printed film onto the screen using a very intense UV light box and…Voila!  We have our stencil! 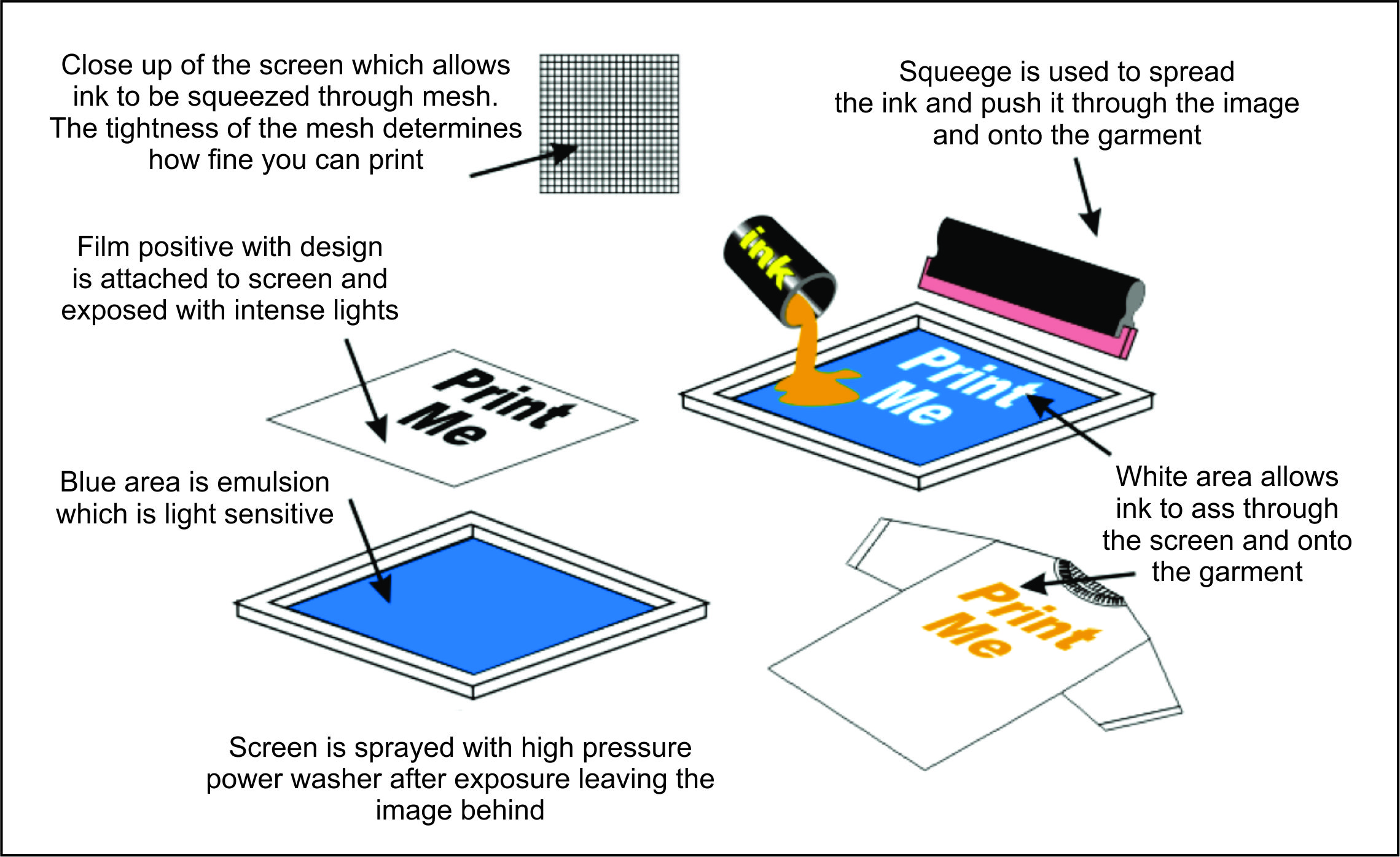 Once a screen is created for each color in your design, they’re then locked into an arm of our rotary screen press and finely aligned, or registered, so that each color is placed precisely on the garment.  Now the fun starts!  We add the required ink to each screen (it’s kinda thick…like finger paint), which many times we hand mix to get just the right color. The garments are then loaded on a flat platen which are attached to arms that rotate under the screens.  Each screen is then lowered onto the garment and we use a wide squeegee to force the ink through the screen and onto the fabric.  After all of the colors are applied, the garment is carefully removed and put onto a conveyor that takes it through an oven to permanently cure the ink.

That’s it!  Now, I may have taken the mystery out of it, but trust me, it’s more art than science.  There’s so many important variables like how we separate your artwork, the type of screen we use (they vary in how fine the mesh is), the amount of time we expose the screen…down to the angle and speed we use when pushing the ink through the squeegee.  Fortunately we have an awesome and experienced crew who are passionate about their craft!